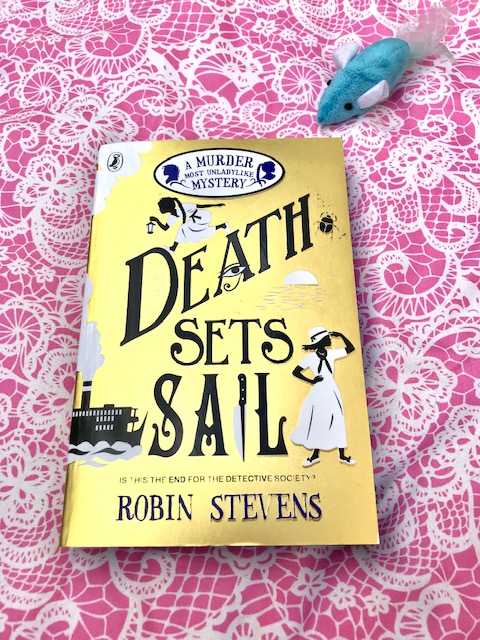 A Murder Mystery book review by Erin the Cat Princess

The news of Upper Much-Mousing events has been cancelled for this week. Not because of illness but because Mrs H ran out fuel for her motorcycle.

How does that affect the news, I hear you ask? Well, it seems she only had enough change in her purse to type up my dictation of this review over the telephone whilst standing in a public call box. Hopefully she, my shopping and the news will return, fully fueled, in time for next weeks review! Also, if this review is a tad more squashed than usual, then blame the size of the telephone box!

Now, enough of the pre-amble and lets get on with the show!

This week, somewhat sadly, we have come to the final main story in the MMU (Murder Most Unladylike) series of murder mystery adventures.

It has been a fascinating and exciting series that has kept us going the past couple of years. OK, enough chat, let’s get this show on the road, or should I say, all aboard the steamer for a trip down the Nile!

‘This is an account of the last murder mystery the Detective Society will ever solve together.’

The story opens with these very telling words. Words that will hang like a portent of death, a harbinger of evil, in the bone-dry Egyptian air throughout what is to come for our two, seemingly invincible detectives . . .

For this finale of an adventure, it is fitting we should have all of our favourites from the series. Hazel, Daisy, Hazel’s father and her two sisters, Amina and her father, and George and Alexander of the Junior Pinkertons come together for one last adventure.

Hazel’s father agrees to her going and says he will meet them there to share Egypt as a family. Daisy gets Uncle Felix’s blessing too. Together the three girls fly to Egypt and take the sights, escorted by Amina’s family’s long-suffering pallid English governess.

On arriving at her father’s hotel in Cairo, Hazel, along with Daisy and Amina, can’t help but hear and see a loud and irritating group of genteel European ladies and gentlemen. If only that was all, they were! They are members of a fantastic sect called the Breath of Life, who believe that they are the reincarnation of the pharaohs. The more you pay them, the greater chance the sect’s head, Mrs Theodora Miller, will divine you to be a high ranking king or queen. She already thinks of herself to be Hatshepsut. The locals quite rightly ignore the sect’s preaching; after all, why would an Egyptian pharaoh come back as a dumpy European lady?

Anyway, the girls think they have seen the last of them, but they not only board the same train to head to the Nile but also end up on the very same cruise!

Tensions carry on rising amidst the members of the sect and the crew. Not helped by Mrs Miller commandeering the lounge for some unusual rite that involves the weighing of the heart (not literally) to find if someone is worthy.

When Mrs Miller is found murdered, stabbed to death, and her daughter sleepwalking whilst covered in blood, they seem to have an open and shut case. Let me tell you that once the girls and the boys get investigating, it is anything but.

Estranged family with an axe to grind? Members of the sect jealous to rise in the ranks of the reincarnated? Any number of people suddenly seem to have a motive. But Who Actually Did It???

And there is where I have to leave the review and taster. I may have said more than I ought, but I think the mystery is so very much more.

What did we think?

Whoa, what a finale to the series!

We loved the characters; they really are a fabulous bunch of potential suspects. It is wonderful that so much gets said between Hazel and her father and the boys and girls. That is nice and settles some questions.

The scene setting gives an authentic flavour of the day and location. Mixed with but not overburdened by a selection of facts that carries us through the story and educates.

Think of the best Agatha Christie adaptation for the movies or small screen, and I think this is comparable. In its now inimitable fashion, it casts the same sort of magic for its younger reader. It has taken many readers, ourselves included, on an emotional and exciting ride right up to the final pages. Arguably, even beyond!

High praise, and yes, it does deserve it. The whole series has won plaudits from many reviewing agencies.

Until you start writing characters and plots, I do not think we as readers can truly grasp the enormity of the task of ‘world-building’. Robin Stevens has masterfully created a timeline of adventures that take the girls across countries and through the seasons. They experience love, loss, fear and friendships. And through it all is woven the unstoppable and inescapable acts of growing up. Culminating in what is truly one of the classic settings, and a nod to a Mistress of Murder.

I think a sign of how masterful this series has been is the fact neither Mrs H nor I had realised how much we had become invested in their lives and world. How much we cheered them on, gasped at revelations or kicked ourselves, along with the characters, when things guessed incorrectly or a wrong turn made.

I will make no apology for the fact that I have had to be particularly candid about the story’s details. Things get going quite literally from the opening line.

Be prepared to be shocked, raised high, then plummeted to depths. For those that haven’t read this series, I do strongly suggest reading from the beginning. Yes, you can read this as a stand-alone, but it will be losing the contextual experience of the relationships between characters and their investment in each other over 8 books. If you have read up to this point, then I need to say no more than be prepared, but this is everything we have been waiting for and more.

Want to buy a copy?

If you’d like a copy of Death Sets Sail for your next cruise, please do support your local bookshop first.

If you would like something extra spiffing, Round Table Books, here in the UK, can offer special editions, signed copies and pre-orders. I believe they do ship internationally too. A link to Round Table Books special orders can be found HERE.

Now, eagle-eyed among our readers will have spotted certain clues that there may be more books to this series. And I am pleased to say that there are some short stories to be had. The first is called Cream Buns and Crime and subtitled ‘Tips, Tricks and Tales from the Detective Society’. Jolly good fun for your next bun break!

There is also the recently published collection of 6 short adventures called ‘Once Upon a Crime’. Two of the stories have been published separately – The Case of the Missing Treasure and the Case of the Drowned Pearl – but have not been widely available. So seeing them here makes a welcome addition to this new book so all can enjoy them.

‘Once Upon a Crime‘ features characters old and new and recounts tales of ‘off-screen’ moments referred to in other stories, as well as a lead into a brand new series of adventures for Hazel’s sisters, May and Rose.

We read this in the last few weeks and can happily say it lives up to the main 9 stories and is a most welcome addition to the Murder Most Unladylike series.

OK, so that really is it from us here at the Palace this week. We will return with a review of another great set of books for you to enjoy.

Till then, we hope your own summer vacations culminate in nothing more worrying than thoughts of the reincarnation of last nights pizza!