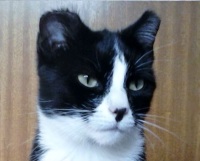 Do you think I should celebrate or something, have a party maybe? like a birthday party but without the birthday bit, but with all the trimmings, you know, nip, cream, nip and cream?

What’s that peep? a few pals too maybe? Yup that sounds good. We could invite the young lad Shadow from around the corner, and that lovely couple Pebbles and Lola from the big detached mansion North of the Palace, you remember, with the water feature and the large fleshy and tempting fish, not that I paid much attention you understand. purrs

What’s that? invite everyone everywhere? Mouses! Are you mad peep? think of the postal charges, not to mention the printing costs. Our mail lady would be going everywhere non stop from now till next year, in fact by the time the invites have been delivered it’ll all be over and she’d have to back here to deliver the next lot.

I mean, I don’t know how she manages it. Every day except Sundays and holidays, off she goes, rain sleet, snow, and tidal wave, treading a well worn path through the estate to deliver the mail. Never flinching in the face of the Palace lions, or the sundry guard dogs dotted about neighbourhood. She, like the Pony Express of the old Wild West, always gets its man. Hmm…that doesn’t sound right, maybe it’s The Mounties always get through.

What’s that peep? Its the Canadian Mounties that always get their man?  Well I never, who knew they deliver the post here too, heck that’s one very big delivery round, and that’s on top of chasing all those bad guys through the snow. Believe me that isn’t easy I can tell you, I’ve tried with mice and it takes a certain sort to do that, not that the Mounties chase mice, no ma’am, that’s up to the unmounted Mounties cat. Hats off to them all I say. purrs

What’s that you say peep, I can email everyone? Well why didn’t you suggest that before, that’s a grand idea, will save loads of paper and a forest or two, and all I’ll have to do is pay the postage. purrs

You know a party goes better with a celebrity, I wonder who I could get? There’s that lovely new cat, Felix, from Huddersfield, UK who has recently been promoted to Senior Pest Controller at the train station, doing sterling service and has been fast tracked to a top job. Now that’s what I call a go get em sort of gal!

Hmm… on second thoughts she probably won’t be able to come due to the last train times, and there is the small issue of the Palace’s station having been closed these last few years. Mouses!

Well well, a year, actually its a bit more than a year but still, a year on, who could have thought….

What’s that peep? I haven’t actually said what it is a year on from? Ooops! sorry folks, I best advise that on 23rd of January 2015 I published my first ever blog post! Yup 33 posts and a year (and a bit) later, here I am.

You know if it wasn’t for you, my fellow bloggers, you who inspired and encouraged me, I wouldn’t be the Princess that you see before you and read about today.

Those early days in the year were very touch and go, I had some close shaves, and I’m not speaking about being, well, you ladies will know what I mean. There were times when things were rough at the Palace, when I had too much on my paws to handle, what with peep and papa’s illness. Those times take a lot of strength, resilience, and they also need friendship too. These were things peep didn’t have so it all had to came from me and my new pals in the wide world of the blogging family.

It was a lot to ask (which I wasn’t) and even more to do, for a scared cat off the mean streets. Thrown into a position of great responsibility with no training no back up to turn to, it was worse than having kittens. Mouses! 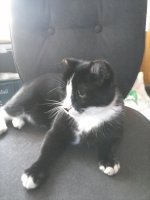 Now on that point I am reliably informed by Kitipedia, that the expression “having kittens” is a peep expression for being frightened. Heck, seeing a peep have kittens would be enough to scary me into having kittens too. So again I say, Mouses!

Anyways, I posted a lot about these times, in real time as it were, as a way of de-stressing and sharing. It’s true you know, what they say, a problem shared among a few hundred is a problem… hmm… not sure on the math on that, but it’s a lot less. purrs

Seeing my blog gave peep a chance to see things in a different light, from another’s perspective, and achieve a balance of sorts.

Now peep doesn’t always read my blogs, in fact in the early days peep positively frowned on the idea of me using the interwebnet, as it was called back then. Mind you that could have been the incident with my Pal that Pays up the Amazon and a rather large bill for cream, cheese, and nip. Or maybe it was the time I broke his new lap pot, or the time sparks that came from the printer.

But with regards the latter, that was absolutely nothing to do with me, and that pile of treat crumbs found at the scene was just circumstantial, which I think means they were round. In any event, but specifically this, they were round, hanging round that is, in the printer. Who knew that crumbs collected that way, probably have the same Union as the toaster.

In those early days I pretty much kept the blog under wraps or often under the bed (and once actually in the bed) as a sort of pet peep project, something to unwind to, bit like Dr Watson did when he wrote up the adventures of his pal Sherlock Holmes, Private Eye. Those two Victorian chaps had a whale of a time and worked well together, though at times they disagreed, they always got their man, like the Mounties, though I’m fairly certain Mr Holmes and Dr Watson didn’t deliver the mail. purrs

There were of course also the funny days to write about, like our very own nosey neighbour cat, Bailey, who provided tons of entertainment, not to mention plenty of exercise for peep on account of all the running around the Palace that needed to be done chasing that fluffy lad. I swear peep has never been so well exercised, least ways not since Mr Rat came to play…

Then last Easter we had 3 rabbit visitors, or maybe it was one rabbit visitor 3 times, who knows, but but them bunnies were all over the palace. Well as the old saying goes ” A rabbit isn’t just for Easter, its for keeping the peeps shoes warm, dusting under the sideboard and generally having a fun time.” Though I did draw the line when I found it in my own bed. Mouses!

And there was even murder well a lot actually, (peep can always kill a good joke) and more than a modicum of chaos, a sprinkle or three of misunderstanding, and possibly more than a half pint of cream and nip to top it off.

OK OK, maybe it was… ahem… a bit more than a pint, but I haven’t a problem, just want to clear that up, I can stop anytime, and do, especially when the cook hasn’t been shopping. purrs

Of course no write up of a year would be complete without an adventure, and I discovered a fiendish plan by Metric Mice to to take over the world and make everyone and everything square. Frankly judging by peeps dress sense I think they may have made inroads already, but with a copy of Cosmopolitan Cat to paw, I will turn things around, possibly twice just to make sure peep has washed behind the ears! 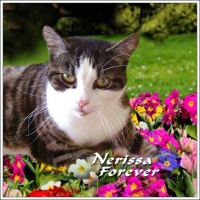 Well there you have it, a year (and a bit) gone by. A year of contrasts and emotions. With great sadness we learnt of the loss of a great Adventure Cat and friend to us all, Nissy, who slipped OTRB.

You know sat here now, I can’t help but feel that there won’t be a shortage of adventure wherever Nissy is, nor for that matter nip and cheese, and no doubt a few Grammar Mice thrown in for good measure. Mouses!

From that loss came Seville, Nissy’s brother, who brought his own magical wisdom and wit to lighten our way, what a guy!

Anyways, together with you all, peep and I have made it through bad times, worse times, sad times and found ourselves sharing many a happy tale from pals across the world.

What better way to start another year than how we ended this last one (and a bit), with a smile and happiness for all the good and surprising things that come from sharing and caring.

Thank you all, and here’s to the next year (and a bit) (and an extra bit, being a leap year and all) and all the times we can share. purrs

What’s that peep? a letter? for me? WOW! my first bit of fan mail…. let me see…. best read it now in case it needs a reply…

Hmm, it’s from a reader, one Mrs McLitter of  Lower Nether End. It reads:

With regards your recent article entitled “New Who?”, I do rather think that you have missed the point of the television series, and the whole space time continuum thingy. Being a Time Lord, I suspect, mitigates the need for earthly diet foods which would, I imagine, have little impact on an alien time traveller, though indigestion may be a risk. In any event, and not wishing to point out a big flaw in your plot, one would only need to have to go back in time, or regenerate to lose any surplus weight gained.

As to the new monster called “peep”, I mean, do you really expect us to believe that it could be foiled by a mere Brussels sprout? Please, get a grip on reality, and try harder next time.

Regards from an avid fan.

Oh well, I suppose you can’t please everyone…… purrs 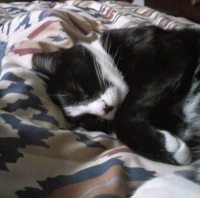