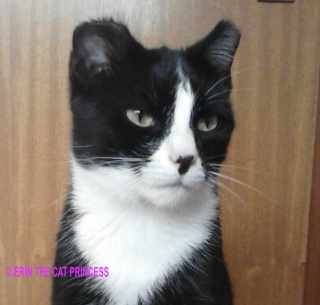 What you doing peep?

What ARE you doing?

What’s that peep? What do I mean, what ARE you doing?

What do YOU mean,”What do I mean What ARE you doing?” I mean what ARE… Hang on a mo, this is silly, not to mention confusing. Mouses!

Look peepers ol’ pal, what I was asking before the repetition was, what are you doing, with the emphasis on the ARE, though whilst were on the subject may as well include the WHAT and the YOU, oh and DOING too, though for clarification there is no emphasis on the TOO, just saying, as don’t want you confused peeps do we, no ma’am too much of that already. purrs

Now on that basis, and with all due clarification, peepers ol’ fruit, what ARE you doing?

Now look peepers, saying you’re not doing anything is no answer, well it is but it isn’t the answer this Princess needs, and if I’m not mistaken as you’re still here, that clearly still implies you must be doing something and that something isn’t a something of nothing either. Mouses!

Mouses! this is worse than getting that mouse out of your boots. Though with the… er… odour, it hardly seemed worth it, little mite was unconscious when I got him. Still, waste not want not, and a sprinkle of nip can work wonders for the palette.

Anyways, I do need an answer ol’ peepers, and that answer has to do with something, and that something is…… hang on what was it again?

I mean that isn’t doing nothing now is it, peeps my pal, though arguably those there newspapers aren’t doing anything.

Of course, existentialists such as Heidegger or Sartre could argue they exist and thus are doing something by virtue of being newspapers, and are self determining agents of their destiny and have chosen to be in a pile and gathering dust. Soo, technically they are doing things, three things, which seems to be two things more than you peepers, well two if you exclude gathering dust yourself. purrs

Anyhows, those there newspapers are just coming in and piling up, unread it has to be said, by either you or I. Now call me a young old fashioned Princess, but them there papers, them NEWS papers, big clue there peeps, sort of come to give us NEWS. Their raison d’etre as it were, not forming an orderly pile, though that is a very British thing, orderly piles.

And of course they’re gathering dust too, I mean that would make them Dustpapers surely, and then there’d be trouble with the dusters unions and everything, on account of them not being cloth, and who knows where that could end. One thing would lead to another and there’d be a press war and before I could wipe the cream off my whiskers there’d be press hounding me for signed pictures and the low down on it all, not to mention scaling the ramparts with vacuums to drag up the dust that was swept under the Palace rugs. And I really don’t want that, do WE peeps!

Hmm, maybe I should get some new publicity shots done, and get the cleaners to not clean for a bit, just in case, no need to disappoint anyone is there. purrs

Anyhows, how’s a Princess to write her blog, huh? I mean, I do need to keep abreast of current affairs, which, with those modern smudge free inks, is now way less of a problem for my white hairs.

Yup, a blogger needs to abreast and on top of the Times, also the Independent, the Telegraph (other newspapers are available) and the Catnip Investors Guide, else how could I be topical?

True, if that pile gets much larger I’ll not only be on top of the times but also that new bookcase, and that does have a certain appeal on account of a large pink floofy object I saw hiding up there.

What’s that peep? A feather boa you say? Hmm, I’m not entirely sure we should be encouraging snakes, pink and feathery or otherwise, but I do need to make sure it’s had its jabs and isn’t concealing any mice. I mean, I am the only one in the Palace that’s allowed to do that on account of my Royal warranty.

What’s that peep? warrant you say, it’s not a guarantee you say? Well I’ll warranty you’re wrong there, peeps ol’ fruit, as I’ll absolutely guarantee that I’ll one hundred percent catch mice, and secrete them in various places. One hundred places, possibly even one hundred and two if it’s the weekend. purrs

OK, so maybe its percentages of them in one hundred places, but it’ll all still add up to one hundred, I’m fairly certain of that. And if there’s anything that doesn’t add up, I can always throw in a small rat, as they’re worth more. purrs

Well maybe not the bottom of it exactly, as I’m fairly certain that, that copy of What Mouse & Mousehole will bring the whole lot down if I give it a pull, and that would be a disaster, and probably make the news. Though given our current predicament, I suspect we wouldn’t find out about it on account of it probably being buried under a pile of unread news, or at least a scattering of fallen down unread news. Mouses!

All of which does make me wonder if it would still be news, even if it was six weeks old news? I mean does news have an expiry date, like cream?  A Best used before date? Will it turn all yellow, blue, with streaks of green and grey fluffy bits if you leave it in piles unread? Eww can you imagine the smell, not to mention the cleaning bill. For readers of a sensitive nature I hasten to add that I never leave cream to do that, never, I do have standards you know. purrs

But what of all this unread news, huh? has it got to sit there, in limbo, until it’s read. Are all those incidents and scandals put on hold? Will Mr X have to stop his fling with Mrs Y until ol’ peeps over there decides to read it? Think of the havoc on the stock markets too, nip futures would be frozen, and frozen nip isn’t that much fun I can tell you.

And how, peeps, am I to keep abreast of international affairs, not mention the marriages, births and the whole court scene? I do have a position to maintain as head of the Palace, and I need to be on top of the game. OK, granted there are few pheasants around these days, but I do need to know just in case.

What’s that peeps, your depressed you say? Bored with the same old headlines and same old news. All the same drivel about the EU, the petty political squabbling, corruption, or reality TV shows and soap operas or the EU. OK I can see how it’s easy to get them all confused, but there is no need to be upset or depressed, my little peeps, I mean, I never get bored with my magazines on cheese and nip, and now they do a scratch and sniff and lick I’ve never been happier. purrs

OK, so scratch and sniff political comment probably wont work, and the whole EU thing will just smell of those stinky little Brussels sprouts, and nobody would want that. Mouses

Anyways, there’s so much more in them there newspapers than just the the front pages. I mean there are the ad’s for comfy slippers, stair lifts, and those elasticated skirt/trousers waist extenders for the, ahem, expanding fuller figure that some of us, and I don’t mean me as I don’t wear skirts, seem to have. purrs

OK so they mightn’t be the best things in the papers, but they do make me laugh. Best of all though peeps, is all those Sudoku you like and those fiendish cryptic crosswords from dashkitten.coms pal, the enigmatic PHI.

But seriously, there’s the waste of all that paper. All those newspaper trees that left the forest with the expectations of a career in publishing, only to have it dashed by not being read. Is that any way to treat those trees? Did you think about that peeps, huh? Bet you didn’t, and if everyone did the same the world would run out of news trees and the news, then where would we be? No blog, that’s where and there will be one unhappy Princess at a Palace, and in case your wondering, that would be me!

So what do you say peeps, huh? PLEASE start reading those papers, for my sake and those of the cleaners Yes? No?

OK, let me put it another way, no new news would mean no blog and no blog would mean I would have to spend more time doing other things. Other things like catching mice, and rats, and moles, and rabbits, and all manner of fine furry creep crawly slithery creatures you’ve not yet met. And of course with all those new pals I would just have to bring them home for you to see. You know peeps, whenever the urge takes me I just cant help but but bring my pals around for supper.

6 thoughts on “WHAT YOU DOING?”